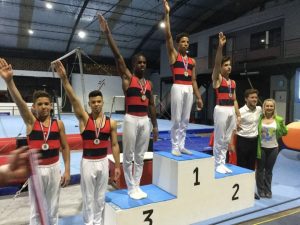 Always strong in women’s artistic gymnastics, Flamengo is once again becoming prominent in the male scene. Proof of this was the performance in the State Championship, played last Sunday (15), at Arena Carioca 3, in Barra da Tijuca. Champion of all the races of the youth category, Rubro-Negro still had Marcos Paulo Oliveira as gold medalist in the individual general adult, totaling 75,700 points. The results were not disclosed by teams and devices of the main class.

Josué Soares Heliodoro was the main gymnast of youth disputes, being champion of the individual individual, solo, pommel horse, jump, fixed bar and asymmetric, besides winning the bronze in the rings, a race won by the red-black Iago Retamiro. Cruz, who still got the silver of the heel and the bronze of the fixed bar.

Guilherme Henrique de Paula was silver in the general individual, in the hoops and asymmetrical and bronze in the ground, horse with straps, heel and fixed bar. Roger Luiz Gomes got the silver from the ground and the horse with straps, as well as the asymmetrical bronzes and the general individual. Already Cauã Siqueira was silver in the fixed bar. In the team classification, Flamengo added conquered the first place, with 200,600 points.

The previous Sunday (08), Flamengo had already been champion of the State Female, having won all the golds in the adult category, highlighting the return of Lorrane dos Santos, and totaled 24 medals overall.