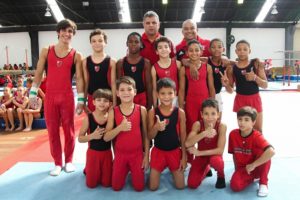 The red-black male artistic gymnastics is growing in Gávea. Over the past two years, during the club’s revamping of Olympic sports, the boys’ team has maintained and gained even more members from the Semper Flamengo Sports School for the Pre-Child category. Coach Roberto Nassar tells the story of the group since the fire of the gym Claudio Coutinho.

“We have 14 boys on the team today. After the 2012 disaster, they trained without equipment and then at UERJ. But even with all the difficulties we managed to keep our athletes and still increase the team with four athletes from the Always Flemish Sports School. We have to remember that men’s gymnastics has a lot of competition from other sports like soccer, basketball, judo. This number is very expressive to us. The new equipment was our salvation, we have support again, ”he said.

With the reform of the gym and the gap soon being delivered, Flamengo should be, by the second half of this year, one of the best private gym in the country. The structure may serve as a barn for more and more new talents, which Nassar says must have some characteristics to stand out from the rest. “Body structure, biotype, displacement, running, motor coordination and jumping skills”, he concluded.